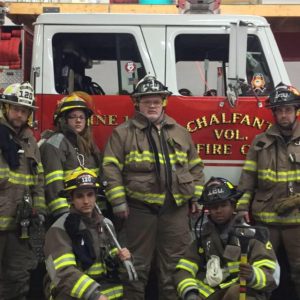 About the Chalfant VFC

In the early years of the fire company, they utilized a hand drawn hose cart they pulled to the fire and later used motorized apparatus such as the REO, Diamond T, American LaFrance, Ford Darley, and Ward La France.   The company presently runs with a Pierce International that was purchased new in 1994 and recently received 1st place for the Best Appearing Engine:  1990-1999 at the 2017 Fireman’s Association of the State of Pennsylvania Convention and Parade which was hosted by the Penn Hills Fire Departments (221, 222, 223, 224, and 225) in September 2017.

Currently, over fifteen men and women serve on the fire company and work hard to protect the citizens of Chalfant.   The VFD also responds to mutual aid calls in our surrounding municipalities.   All members of the fire department are volunteers, and there are many opportunities for residents to participate as firefighters, drivers, and other capacities.

Men and women of all ages are welcome, and no previous experience is required.   To learn more about the Chalfant Volunteer Fire Department, please stop by the firehouse on any Thursday evening at 7:00 P.M., or contact the fire company president at  (412) 829-7415.